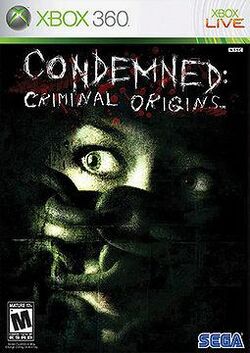 Condemned redirects here. Were you looking for the sequel or the prequel?

Condemned: Criminal Origins is a survival horror game produced by Monolith Studios and published by SEGA for the Xbox 360, and later PC. It was released in North America on November 15, 2005, Europe on December 2, 2005, and Japan on August 31, 2006. The PC version was released April 11, 2006. It is rated Certificate 18 for a mature audience only, and in some European countries the game was banned completely. The sequel, Condemned 2: Bloodshot was released March 11 2008 for Xbox 360 and Playstation 3.

The game sets with the protagonist, SCU agent Ethan Thomas, arriving at the scene of a murder. He and his fellow officers enter into an abandoned building that is surrounded by psychopaths and criminals. The crime scene they investigate is of a young woman. She is on the floor with strangulation wounds, sitting across a table from a male mannequin. Ethan, along with his colleagues, agree that the murder was most likely committed by the Match Maker, a serial killer that Ethan has been investigating. After they collect evidence from the scene, one of the officers smell cigarette smoke. Believing that the smoke must be coming from their suspect, they decide to split up and go after him. While searching for the suspect, Ethan tries to restore power from an electrical box. Due to an electrical surge, Ethan is shocked, and drops to the floor, causing his weapon to be thrown from his hand. A man hiding in the shadows takes it and flees. Ethan manages to chase the man into a small, dead-end room, where the man holds Ethan at gunpoint and tells him they have similar goals. Ethan's colleagues enter the room and tell the man to drop his weapon, and are promptly shot by the man with Ethan's gun, who then shoves Ethan out a window onto the street.

Ethan wakes in his apartment with Malcolm Vanhorn, a friend of Ethan’s father, at his side. Malcolm warns Ethan that he is wanted for the deaths of the two officers who were shot with Ethan's gun. Ethan is determined to prove his innocence, although his own sanity appears to be slipping, as throughout the game he suffers numerous horrific visions.

He soon learns that the killer is interested in Ethan’s SCU career. Later, he finds the body of the Match Maker, killed by his own modus operandi in an old department store. He presumes that the man at the original crime scene, referred to in the game as "Serial Killer X", is the culprit and that he is trying to kill the serial killers that Ethan is looking for. Ethan searches for the one that he thinks is next, a serial killer dubbed 'The Torturer'.

Ethan tracks the Torturer and Serial Killer X to an abandoned apple orchard in the rural town of Brier. Shortly before finding the Torturer in the farmhouse, Ethan is attacked by a strange man-like creature. Ethan kills the creature, and continues in his search. He searches through the farm where he eventually finds the Torturer dead, also killed by his own modus operandi. Soon, Ethan finds the mysterious killer, who is revealed to be Leland Vanhorn, nephew of Malcolm Vanhorn. Malcolm arrives and knocks Ethan out with a shovel to prevent him from hurting Leland. Leland then knocks Malcolm out.

When Ethan revives, he is tied up and at the mercy of Leland. He explains to Ethan that he has been killing the serial killers that Ethan had been hunting, and that he intends to kill Ethan as well. As Leland thinks of all the ways that he can kill Ethan, cutting Ethan's finger off in the process, Ethan notices another man-like creature hiding in the rafters. This creature is known as 'The Hate' and is identified as the source of the madness gripping Metro City. Malcolm jumps Leland from behind and succeeds in wrestling him to the ground. Ethan manages to free himself, and Malcolm tells him to kill The Hate, saying that it is the cause of Leland’s madness. Ethan pursues The Hate as it tries to escape, fighting waves of hideously deformed creatures along the way, and eventually corners it in a barn and kills it.

As Malcolm drives Ethan home, Ethan discovers that Leland is alive, and in the trunk of the car. When Ethan opens the trunk, he is given the option to shoot the tied-up Leland. If he does not shoot Leland, Leland pulls out his own gun and waves it at Ethan before committing suicide. Later, Ethan and Rosa are having a conversation in a diner when Rosa reveals that she is wired, possibly explaining that she still trusts him. Rosa then leaves the diner, and Ethan goes to the bathroom. While in the restroom, the player witnesses as Ethan's mouth becomes that of one of The Hate before the game comes to an abrupt halt.