Edit
watch 01:36
We're Getting Mutants in the MCU - The Loop
Do you like this video?
Play Sound
Condemned 2: Bloodshot 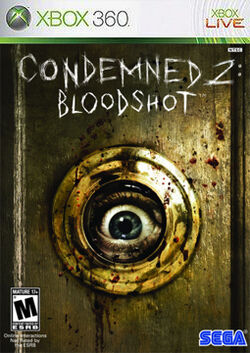 Condemned 2: Bloodshot (also titled Condemned 2 in Australia, Europe and Asia) is the second game of the Condemned series and is a sequel to Condemned: Criminal Origins. It was developed by Monolith Productions and published by SEGA for the Playstation 3 and Xbox 360. The original never appeared on the Playstation 3, and the sequel does not appear on the PC. It was released on March 11, 2008 in North America, was released separately on both platforms in Australia, with the Xbox 360's version being released on March 28, 2008 and the Playstation 3's version released on the 3rd April 2008, and the European versions being released on the 4th April 2008. The game was banned in Germany, as was the original game. This game, like the original, has an 18/M for Mature rating.

The events of Bloodshot take place 11 months after the events at the end of Condemned: Criminal Origins. The protagonist, Ethan Thomas, has transformed from the clean-cut well behaved agent from the start of Criminal Origins, into an angry, unstable alcoholic. The main plot outline of the sequel is that the hero of the first game is still combating psychopaths, but is now unstable himself. He is seen being haunted by creatures such as the Alcohol Demon, who appear in visions, dreams and television broadcasts throughout the events of the story. The game explores sci-fi themes, and the cult known as the Oro is finally revealed, and it's ex-members are being hunted down and killed by the serial killer/antagonist from the first game SKX, who was thought to be dead.

Under the orders of Director Farrell, Ethan Thomas is recruited back into the SCU to investigate the murder of his one-time mentor Malcolm Vanhorn. He is aided by his old partner Rosa Angel and commanded by the hostile and antagonistic Agent Dorland, SCU's tactical commander. Over the course of Ethan's investigation, he discovers that his arch-nemesis Serial Killer X is still alive, having been nursed back to health by his uncle Malcolm Vanhorn after being shot in the head at the end of the original Condemned. Serial Killer X killed Malcolm Vanhorn, as well as Metro City's Mayor Rachel Mars, and eventually kidnaps Director Farrell.

Ethan and Rosa also discover the source of all the city's troubles is a secret organization known as "the Oro", the cult hinted at in the first Condemned, whose members use painful metal implants to develop psionic powers that allow them to influence and control the rest of humanity. Rosa theorizes that they are the source of all humanity's crimes, wars, and hatred.

Serial Killer X, having learned about the Oro, now wants to harness their psionic ability, and is currently killing and dissecting Oro members to obtain this ability. The Oro are much more powerful than previously thought; their members include many high-ranking members of society, including Mayor Mars, Director Farrell, and Agent Dorland. The Oro also control the SCU, and Dorland and his tactical teams attempt to kill Ethan when he discovers their secret. Ethan fights back with the help of Rosa and SCU Agent Pierce LeRue, and even Serial Killer X, who saves Ethan from the SCU, calling it "a future investment".

Malcolm Vanhorn, who has spent his life battling the Oro, leaves Ethan a videotaped message revealing the final truth; Ethan's parents were Oro members who defected from the organization and were killed for it. Ethan himself is "the Remedy", a long-prophesied being possessing "perfectly evolved" vocal cords capable of generating the Oro's sonic power without the metal implants the Oro use. Ethan's ability is more powerful than the Oros, capable of destroying flesh and bone. The Remedy is destined to be "the voice opposing that of the Oro". As a result, Agent Dorland and the Oro want Ethan dead. Director Farrell, part of a splinter faction of Oro that wants to recruit rather than destroy Ethan, sacrifices his life to unlock Ethan's sonic powers after the two of them are cornered by Agent Dorland.

Ethan proceeds to the Peninsula, an artificial landmass where the Oro have a secret base from where they monitor and control the entire city. Using his newfound sonic powers, Ethan defeats the Oro members, destroys the Oro machinery allowing them to control the city, then battles Dorland in a sonic duel within the collapsing Peninsula. Defeated, Dorland informs Ethan that the Oro's motives are "To create hostility, The unwavering desire to fight. To unknowingly become... our protectors." Ethan asks what they are protecting against, receiving no reply. Ethan tells Dorland he is nothing more than a puppet, and the former commander is flung to his death. Ethan escapes in a helicopter along with Rosa and LeRue, declining LeRue's offer of a drink and falling asleep. Meanwhile, the President of the United States suffers an apparent heart attack after receiving the message "The Remedy is among us!", suggesting that the President was a member of the Oro. Finally, strongly suggesting a sequel, Serial Killer X is shown receiving Oro metal implants in his mouth, similar in appearance to the those of the "final boss" Oro member Ethan fought and killed at the end of the first Condemned.