Edit
watch 01:36
We're Getting Mutants in the MCU - The Loop
Do you like this video?
Play Sound
Ike Farrel 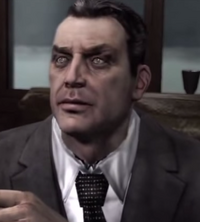 Director Ike Farrell is the Director of the FBI's Serial Crime Unit, appearing in both games. He hired Ethan Thomas for the SCU because he was aware of Ethan's psychic abilities to connect into serial killers minds. He is a supporting character in Condemned Criminal Origins and Bloodshot. He is voiced by Peter Jacobs in Criminal Origins and Paul Eiding in Bloodshot.

Farrel was the head of the SCU at the time of the SKX Murders. Over the course of the game, he begs Ethan, who is accused of killing two police officers, to turn himself in and later begins to threaten him. He has never really shown he cared that Ethan practically solved the SKX murders alone, and has remained oblivious to Ethan and Rosa Angel's friendship.

At the beginning of the game, Farrell is informed of the death of Malcolm Vanhorn by Rosa and summons Ethan back into the SCU to help find his corpse. It is revealed that he is a member of the Oro, along with Agent Dorland. However, unlike Dorland, who plans on killing Ethan due to his natural ability to produce psionic sounds (i.e. "The Remedy"), Farrell hopes to recruit Ethan into the Oro and put his ability to good use.

During the Trenton District level, Farrell is kidnapped by Leland Vanhorn who plans on killing him as part of a sequence of murders of various former Oro members. This includes Mayor Rachel Mars, Magic Man, Malcolm Vanhorn and Ike Farrell himself. SKX holds Farrell in the freezer of St. Joseph's Secondary School, the same school that the The Torturer once attended.

Despite being cut open, Farrell survives long enough for Ethan to come rescue him and escort him towards the gymnasium, which has been converted into a combat arena. As Ethan combats several of the homeless people SKX experimented on, Agent Dorland suddenly appears and pushes Farrell into the arena, ordering him to finish Ethan off. Instead, Farrell helps Ethan to discover his "voice" ability and Ethan responds by making Farrell's head explode.