Edit
watch 01:36
We're Getting Mutants in the MCU - The Loop
Do you like this video?
Play Sound
Ethan Thomas 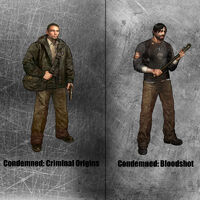 Ethan Thomas is the playable protagonist of the Condemned series and first appeared in Condemned: Criminal Origins as a Metro City FBI Detective working for the SCU. His archenemy is Serial Killer X, who framed him for a crime he did not commit, before tracking him down and defeating him in the conclusion of the first game.

In the sequel, Condemned 2: Bloodshot, Ethan has resigned from the SCU and become a violent alcoholic following the events of the previous game. However, upon learning of Malcolm Vanhorn's murder, Ethan joins the FBI once again to uncover the truth.

Ethan Thomas is voiced by Greg Grunberg (of "Heroes" fame) in the first game whilst in the second he is vocied by Andre Sogliuzzo.

Ethan Thomas was attending summer camp when his parents were killed. He never received the full story of what happened, and instead was just told a car accident had taken their lives. Thomas was bounced from foster home to foster home until he entered college. His grades were average until he began studying criminal psychology and law enforcement, which caught his interest. He quickly found himself on a fast track to becoming a criminal profiler within the FBI. Thomas possessed an uncanny ability to visualize a crime scene and decipher important information regarding the perpetrator. Also, he remembers Malcolm Vanhorn from his childhood, confirming his parents and Malcolm's friendship.

The game begins with Ethan Thomas arriving at the scene of a murder. He and his fellow officers go into an abandoned building where they observe the body of a young woman who has been strangled and placed across from a table which sits male mannequin. Ethan and his colleagues agree that the murder was most likely one of the Match Maker's, a murderer that Ethan has been on the trail of for quite a while. After they observe the scene further, they move into another room where they hear someone making noise on the next floor. As the officers pursue the suspect Ethan tries to get the building's electric back online. Ethan finds the electrical box and restores the power, only to be hit by a small electrical explosion, causing him to drop his weapon which is then taken by a man hiding in the shadows. Ethan manages to chase the man into a small dead end room. The man subdues Ethan and tries to convince him that they are on the same side. Ethan's colleagues enter the room as this event takes place, and the man murders them before shoving Ethan out a window onto the street.

Ethan wakes up in his apartment with Malcolm Vanhorn, a friend of Ethan’s father, at his side. Malcolm warns Ethan that he is wanted for the deaths of two of the officers that the man at the crime scene shot. Ethan is determined to prove his innocence.

He soon finds evidence that the man is interested in Ethan’s SCU career, which includes pictures of Ethan, and newspaper clippings of all of the suspects he's been pursuing. After finding evidence that the killer is connected to Bart's Department Store, he travels there. While searching the store, he finds the body of the Match Maker, killed by his own method of operation. He presumes that the man at the crime scene is trying to kill the serial killers that Ethan has been on the trail of and labels him "Serial Killer X". Ethan begins searching for the killer that he thinks is next: The Torturer, who is hiding out at Apple Seed Orchard.

Shortly before finding the Torturer, Ethan is attacked by a strange man-like creature. Ethan kills the creature, and then finds the Torturer dead, also killed in the same way he killed his victims. Ethan swaps clothes with the corpse of the Torturer and lies still on the ground in an attempt to ambush SKX. SKX, now revealed to be Leland Vanhorn, nephew to Malcolm Vanhorn, enters and Ethan begins to pursue him around the house. Malcolm arrives and knocks Ethan out to prevent him from hurting Leland. Leland then knocks Malcolm out.

When Ethan wakes up, he is tied up and at the mercy of Leland. He explains to Ethan that he has been killing the serial killers that Ethan had been hunting, and that he intends to kill Ethan as well. Leland thinks of all the ways that he can kill Ethan before cutting off Ethan's finger. Ethan notices another strange creature hiding in the rafters. This creature is known as the Oro Dark Primary and is identified as the source of the madness gripping Metro City. Malcolm jumps Leland from behind and begins to wrestle with him. Ethan manages to free himself, and Malcolm tells him to kill the creature saying that it is the cause of Leland’s madness. Ethan pursue

s the Dark Primary killing several Dark Watchers along the way. He eventually corners it in a barn and kills it.

As Malcolm drives Ethan home, Ethan discovers that Leland is alive in the trunk of the car. When Ethan looks in the trunk, he is given the option to shoot Leland as he lies tied up. If Ethan does not shoot Leland himself, Leland pulls out his gun and waves it at Ethan before committing suicide. Later, Ethan and Rosa meet up in a diner where they discuss recent events. As Rosa leaves the diner, Ethan goes to the bathroom, where he vomits in the sink before hallucinating that he has metal implants in his mouth, like the Oro Dark Primary.

Ethan Thomas soon finds himself drifting further and further from SCU, his former life and to some degree, his sanity. Despite being cleared of the charges against him, Ethan resigns from the SCU. His boss, Ike Farrell, attempted to bring him in from the cold but Thomas refused—he trusted no one. In addition, Ethan begins to experience horrific hallucinations that progressively get worse. Wanting to numb his internal plight, Ethan hits rock bottom by choosing a life of isolation and self-medication to help silence his inner demons.

Under the orders of Director Farrell, Ethan is recruited back into the SCU to investigate the murder of his one-time mentor Malcolm Vanhorn. He is aided by his old partner Rosa and commanded by the hostile and antagonistic Agent Dorland, SCU's tactical commander. Over the course of Ethan's investigation, he discovers that his arch-nemesis Serial Killer X is still alive, having been nursed back to health by his uncle Malcolm Vanhorn after being shot in the head at the end of the original Condemned. Over the course of the game, Serial Killer X kills Malcolm Vanhorn, as well as Metro City's Mayor Rachel Mars, and eventually kidnaps Director Farrell.

Ethan and Rosa also discover the source of all the city's troubles is a secret organization known as "the Oro", the cult hinted at in the first Condemned, whose members use painful metal implants to develop psionic powers that allow them to influence and control the rest of humanity. Rosa theorizes that they may be the source of all humanity's crimes, wars, and hatred.

Serial Killer X, having learned about the Oro, now wants to harness their psionic ability, and is currently killing and dissecting Oro members to obtain this ability. The Oro are much more powerful than previously thought; their members include many high-ranking members of society, including Mayor Mars, Director Farrell, and Agent Dorland. The Oro also control the SCU, and Dorland and his tactical teams attempt to kill Ethan when he discovers their secret. Ethan fights back with the help of Rosa, SCU Agent Pierce LeRue, and even Serial Killer X, who saves Ethan from the SCU, calling it "a future investment."

Malcolm Vanhorn, who has spent his life battling the Oro, leaves Ethan a videotaped message revealing the final truth; Ethan's parents were Oro members who defected from the organization and were killed for it. Ethan himself is "the Remedy", a long-prophesied being possessing "perfectly evolved" vocal cords capable of generating the Oro's sonic power without the metal implants the Oro use. Ethan's ability is more powerful than the Oros, capable of destroying flesh and bone. The Remedy is destined to be "the voice opposing that of the Oro." As a result, Agent Dorland and the Oro want Ethan dead. Director Farrell, part of a splinter faction of Oro that wants to recruit rather than destroy Ethan, sacrifices his life to unlock Ethan's sonic powers after the two of them are cornered by Agent Dorland.

Ethan proceeds to the Peninsula, an artificial landmass where the Oro have a secret base from where they monitor and control the entire city. Using his newfound sonic powers, Ethan defeats the Oro members, destroys the Oro machinery allowing them to control the city, then battles Dorland in a sonic duel within the collapsing Peninsula. Defeated, Dorland informs Ethan that the Oro's motives are "To create hostility, The unwavering desire to fight. To unknowingly become... our protectors." Ethan asks what they're protecting against, receiving no reply. Ethan then concludes that Dorland doesn't know it himself, that he is nothing more than a puppet, and the former commander is flung to his death. Ethan escapes in a helicopter along with Rosa and LeRue, declining LeRue's offer of a drink and falling asleep.

Ethan Thomas is a skilled combatant, capable of taking on large groups of enemies in hand-to-hand combat or with improvised weaponry and is highly resilient to damage. In addition, thanks to his police training, Ethan can use a variety of firearms and equipment. Ethan's abilities are expanded in the sequel, allowing him to perform a variety of combos and enhanced moves. While still able to use firearms, Ethan's aim is severely affected by his withdrawal from alcohol and must regularly consume Liquor to steady his hands, at least until the Alcohol Demon is defeated.

In the first game, Ethan possesses a psychic link to Serial Killers such as The Match Maker and The Torturer. Ethan uses these visions to get an idea of how their victims died and where. This ability is removed in the sequel and is instead replaced with highly vivid hallucinations in which he is attacked by demons composed of tar. Initially believed to be a result of his alcoholism, it is later revealed to be the direct result of the Oro's power.

Towards the end of Condemned 2: Bloodshot, Ethan discovers he has very high bone density and a hollow sternum, allowing him to project powerful sonic waves using his voice. Using this ability, Ethan can blast through heavy materials, such as metal, and even destroy enemy flesh.